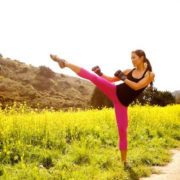 New Year’s 1996, I moved up to Marin to be a Taebo instructor. I was thrilled that I was to be one of only 3 Taebo instructors outside of Billy Blank’s studio in Hollywood. I was mentored by Will Yun Lee.. yeah that guy from Wolverine. I had only been doing Taebo for 3 months and I immediately knew I didn’t want to be just another aerobics instructor. I wanted to really know the punches and kicks that I would be teaching. I wanted to be like Will. He was incredibly confident, super skilled, and just looked bad ass… who wouldn’t want to be like him? I trained in a garage-turned-gym for 3 months straight. Hours and hours everyday – kicking, kicking, kicking, and punching. I had a goal and knew I was going to be introducing Taebo to the Bay Area. Oh, did I mention, I had never done martial arts, taught anything in my life, and was PAINFULLY shy. Like, barely-look-you-in-the-eye, shy?

I rehearsed that first class probably 30-40 times and was still a nervous wreck. I had to throw up twice before even entering the group exercise room. I stumble up to the front of the class and looked out at the 60+ people and could barely introduce myself. I was shaking so much that when I got in to my fighting stance to begin demonstrating the punches, my back ankle was shaking uncontrollably. I was terrified, and to make matters worse when I began to explain the stance and punching techniques, my voice would crack. Did I want to run and hide and never be seen in that gym again? – For sure I did. But instead, I raised my voice, because I noticed that when I raised my voice it would not crack. I also started demonstrating the movements with much more emphasis – crazy big and powerful, to hide the fact that I was shaking. After that, it was like an out of body experience. I shouted like a drill sergeant, ran around the room getting in people’s faces. Kicked higher than I ever thought possible and punched so hard I probably could have knocked someone out. I am sure I made mistakes, but nobody noticed and after class people just raved about my teaching and how it was the best class they had ever taken! I was on a high – I wish I could say for days, but I had to teach my second class the next morning, 14 hours later. And the throwing up/voice cracking/body shaking-to-drill sergeant routine started all over again. And that routine lasted 12 classes a week for 6 months until I finally wasn’t panic-stricken. So what kept me coming back day after day, class after class? Passion. Passion for exercise and sharing with others.
20 years later, I have taught over 10,000 classes – from cardio kickbox to pilates. I have trained clients in their homes, offices and abroad, and lead fitness retreats through my company SweatPlayLive. I sometimes wonder what would have happened if I had decided, way back then, that teaching that first class was just too scary. It is one of those “sliding door” moments. I chose to face my fear and it has brought me here to you, with Sweat Play Live and also Move Your Asana®. On Saturday, that decision is taking me Rancho La Puerta, the #1 Fitness Spa in the world, to guest instruct for the week; and then to Portugal to train on a road cycling trip.
You have heard it before – “Feel the fear and do it anyway.” YOUR desire HAS to be stronger than your fear. My desire to be a Taebo instructor outweighed my fear of failure, even if just barely. It was enough for me to train and endure that first class. Nobody is born with confidence. Everyone you see exuding mass confidence in every situation practiced it until it became a habit. Until that habit became part of who they are. So fake it until you become it! Even Beyonce says she has to turn into Sasha Fierce to get herself onstage. When you feel fear – TAKE ACTION! It is the first step towards building confidence – “Action kills Fear.” Maybe at first you too will need to “pretend” to be confident, strong, and sure of yourself.

By practicing confidence you make it a habit and as we all know, practice makes permanent!